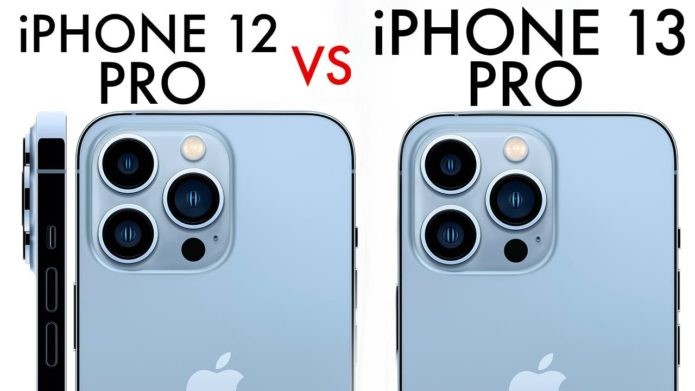 iPhone is one of the top mobile phone manufacturers and has released several series. Following the release of new mobile phones leaves many iPhone lovers who question the difference between the last versions.

For instance, what is the difference between iPhone 13 Pro and iPhone 12 Pro? Well, very few know what makes these phones unique, but here I’ll share with you the features of both phones. The end of the article will get to know which phone is worth it.

For a better understanding of which is the best mobile phone between iPhone 12 Pro VS, iPhone 13 Pro is to look at the features. Here is a comparison of these iPhone mobile phone features and then choose which is better.

Both the iPhone 13 Pro and the iPhone 12 Pro have a triple-lens setup, with a standard, an ultra-wide, and a telephoto lens on each camera. However, there have been some minor but significant changes under the hood.

The standard lens on the iPhone 13 Pro, equivalent to a 26mm lens, has a slightly faster aperture (f/1.5 vs. f/1.6) and uses a larger sensor size, which was previously only available on the iPhone 12 Pro Max.

A new feature for the iPhone 13 Pro is focusing extremely close-up in an automatic, macro mode, which is available for the first time. The camera is switched to the ultra-wide-angle mode when a close subject is detected to capture the image.

Since it occurs automatically, there is no way to prevent it from occurring. However, it is a significant improvement over the iPhone 12 Pro, not providing the same functionality as the iPhone 12 Plus.

Aside from the addition of the A15 Bionic chip (processor) for the iPhone 13 Pro, which is claimed to be the fastest chip ever used in an iPhone, many of the same specifications as the iPhone 12 Pro have been carried over.

The “LiDAR” scanner, which promises faster autofocus in low light (compared to the iPhone 11 Pro), 4K video recording, and the overall screen and body design are just a few of the notable specifications on this list.

ProMotion technology with adaptive refresh rates is included in the iPhone 13 pro, but when you look at both of these phones next to each other, it’s really difficult to tell the difference.

So it appears unlikely that most people will notice much of a difference when using them separately. The iPhone 13 Pro is slightly brighter than the iPhone 12 Pro (1000 nits versus 800 nits in typical usage), but this difference is difficult to distinguish.

Both phones also have the same IP68 water resistance, which means they can be submerged in water for up to 30 minutes at a depth of 6 meters. Alternatively, and more realistically for most users, they can withstand being dropped in the bath or being exposed to a torrential downpour.

In other words, it’s just different enough to warrant you having to purchase a completely new phone case as well – thank you, Apple, for the inconvenience!

The iPhone 13 Pro is slightly heavier than the iPhone XS Max, weighing 203g versus 187g, but the difference is barely noticeable in real life.

While Apple has retained the squared-off curved edges of the iPhone 12 Pro for the iPhone 13 Pro, flipping the two models over will reveal more differences between the two models. The larger camera lenses on the newer model are the most noticeable.

Apple never officially discloses the exact specifications of its battery capacity; we can glean just about everything we need to know from the claimed “playback” life of both models.

The iPhone 13 Pro has a longer playback time than its predecessor. Still, given that the devices are roughly the same size, this appears to be due to the A15 Bionic chip inside the newer model being more efficient and thus allowing it to last for a longer period. On the other hand, we’ve discovered that both models can generally last the entire day with moderate usage.

The iPhone 12 Pro was the first iPhone model to ship without a charger, introduced last year (you do get the cable). The iPhone 13 Pro is no exception – and given that most people have an abundance of USB adapters lying around, this is unlikely to be a deal-breaker for many customers. If you have a 20W adapter, you can charge both phones up to 50% in just 30 minutes, which is quite fast.

The two phones are nearly identical in body design, connectivity (both are 5G), screen, and other aspects of the operation. Suppose you base your phone purchasing decisions on the quality of the onboard cameras. In that case, this is where you will notice a significant difference between the two models in terms of quality.

Some upgrades are available in these quite tempting sections, but perhaps even more so if you’re upgrading from a model other than the 12 Pro. Among the most significant improvements are the addition of a longer telephoto lens, a larger sensor in the main camera, Cinematic Mode for video recording, Picture Styles for still photography, and a new close-focusing option.

All of these features are nice to have, and when combined, they make for a nice set of upgrades, but they are unlikely to be used frequently enough to justify a large expenditure if you already have the 12 Pro in your possession.

However, if you have an iPhone 11 Pro or older and want to upgrade because you’ve had it for a couple of years, the price difference between the 12 Pro and the 13 Pro is so small that you might as well go with the 13 Pro. If you don’t need to upgrade, the 13 Pro is a generation that many people will skip and wait for the 14 series.

If you can find good deals on a contract or the used market for the older 12 Pro model, it may be worthwhile to consider purchasing the older handset when it comes time to upgrade.

Otherwise, if you’re planning on purchasing a new iPhone outright from most retailers, the iPhone 13 Pro is the most cost-effective option.